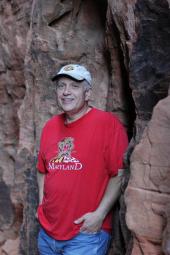 Boyd Petersen is a fifth-generation Utah valley resident. He attended Provo schools; served an LDS mission to Paris, France; and graduated from Brigham Young University with a double major in French and International Relations. Boyd married Zina Nibley in 1984. They became the parents of Mary, Christian, Nathanael, and Andrew. Boyd and Zina were divorced in 2017.

Boyd spent the first chapter of his life employed on Capitol Hill, as an intern for former Rep. Wayne Owens, a staff assistant with the U.S. Senate Committee on Energy and Natural Resources, and a senior information specialist with the Congressional Research Service at the Library of Congress.

He simultaneously worked part-time on an M.A. in Comparative Literature at the University of Maryland. His thesis looked at literary approaches to Genesis 1-3, the Adam & Eve narrative. He began the second chapter of his life–as a college teacher–after moving back to Utah in 1995.

Boyd teaches English and Religious Studies at UVU and BYU; and is the author of a collection of essays, one biography, and loads of academic death prose. In 2006, he was awarded the faculty excellence award from UVU. He subsequently completed a PhD in Comparative Literature at the University of Utah, writing his dissertation on literary creation narratives in 19th century literature.

He currently serves as the Program Coordinator for Mormon Studies at UVU and as the Editor of Dialogue: A Journal of Mormon Thought.